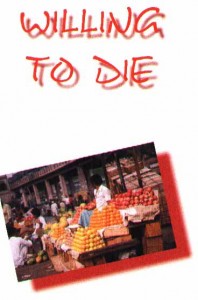 It’s almost a regular feature of the news lately: a crowded market, or bus, or restaurant is suddenly rocked by a violent explosion. The police rush to the scene, knowing that among the dead and the injured they will find one individual who died by choice. Explosives strapped to his body, this person was willing to die in order to kill as many of his enemies as possible.

You probably know who that person is. His name is Jesus, the Son of God from heaven. He was the one person who didn’t have to die: death is the result of sin, and He never sinned. But He died voluntarily, allowing men to crucify Him. While He was on the cross, the Bible says that God was punishing Him for our sins. When the punishment was accomplished, Jesus said, “It is finished!” and willingly died.

You may be wondering why anyone really needed to die for us. It seems pretty O.K. as it is. But one thing we learn from the Bible is that God doesn’t look at things the way we do. “There is no difference, for all have sinned and come short of the glory of God,” is a summary of our condition as God sees it. Because of His infinite holiness, our sin and disobedience to Him cannot be overlooked or go unpunished. If our sin is not taken care of, not only is there a barrier between us and God in this life, but also God’s judgment to expect in the next. The purpose of Jesus’ willing death was to pay for our sins, so God could forgive us.

The fact that Jesus died for us is one proof that no one can earn eternal life by their good deeds or religious observances. If we could get to heaven by our own efforts or goodness, then He would not have needed to suffer at all. but His death was an absolute necessity, because nothing we do can ever take away the guilt of our sins. Jesus did everything required by God to pay for our sins, and by trusting in Him alone we can receive the free gift of eternal life.

I hope we never hear of another individual killing himself in order to kill others. But even if we do, it can remind us of Jesus, willing to die so He could offer you and me eternal life. Do you have it?