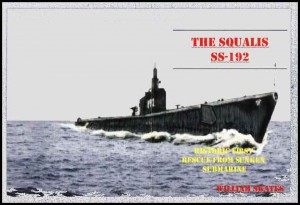 On May 23, 1939, the Squalis, newest submarine in the US fleet, was undergoing sea trials off the New Hampshire coast. She was 310 feet long, 27 feet wide and 1450 tons. There were 59 men aboard. One of the last tests involved a dive to 50 feet under full power. All men were at their stations as the sub commenced the maneuver. However, the valve that should have shut the sea out from the air intake for the engine room had a mechanical failure and did not shut. Immediately the sub began to take on water in the engine compartment. Lloyd Maness sprang to his disaster station. His job was to shut the water tight door from the rear compartments to the control room. The Captain ordered all ballast tanks blown in an urgent attempt to bring the sub to the surface. It pitched upward but the sea continued to rapidly flood the rear compartments.

Last Man into the Control Room
Issacs, the cook, was in the galley when the dive commenced. Suddenly a solid stream of water smacked him in the face. He ducked under it and saw the door to the engine room open – he scrambled to shut it. He stood transfixed looking through the view port at the water shooting into the engine room. Suddenly he became aware of rapidly rising water at his waist – next moment it was at his chest – he desperately began to swim toward the front of the sub, to get to the relative safety of the Control Room. Frantically propelling himself forward, he lost his footing and went under. Maness was already starting to close the door to the Control Room when he saw Issacs, who surfaced, spewing water from his mouth and floundered into the Control Room. Maness had almost waited too long to close the door. The 50 degree angle of the sub meant he had to lift the heavy door toward him. With all his might he heaved and finally…the Door was Shut.

The door of salvation is open wide today, but soon it will be shut. The Lord Jesus Christ said “I am the door, by me if any man enter in he shall be saved” (John 10:9). It is essential that you urgently enter into full confidence in Christ before the opportunity ends and for you the door will shut. He alone can save you from being eternally lost. All who trust him in this matter are saved (Acts 16:31) and rescued from hell and the lake of fire (Revelation 20:14,15).

One who was lost
Maness was to be best-man at his friend Sherman’s wedding, but he now knew that Sherman was on the other side of the door in the aft torpedo room. He hoped he was safe – but he never saw him alive again. When Sherman’s fiancée was notified he was lost she said, “I can’t believe it, I won’t believe it, he is far too good to be lost like that.” But he was lost. My friend if you remain outside the door of salvation in Christ, you too will be lost. It does not matter if your life has been “good” or not, the Bible reminds us that none can be good enough to earn a place in heaven (Romans 3:10-19). If you die without trusting Christ as your personal Savior you will be eternally lost.

The Rescue
The Squalis now lay on the ocean floor at about 240 feet. Swede Momsen was the Navy’s expert on undersea rescue. He had designed and built a diving bell that would attach to the escape hatch of a submarine. He was summoned to the scene of the sunken Squalis. For 3 days 33 men were trapped. Then they were rescued with the bell. 26 men were lost in the disaster. “Christ Jesus came into the world to save sinners” (1 Timothy 1:15). Many have trusted Christ alone to save them and they are presently and eternally saved (1 Corinthians 1:18). All others who reject Him will be lost forever.

Hanging by a Thread
During the last dive the rescue bell was rising with the last men on board. Then, the cable snagged. A diver descended and found the cable was frayed to the point of breaking – just a thread and the balance of buoyancy in the bell, was all that was keeping it from falling irretrievable to the ocean floor. Just the thin thread of life keeps sinners from falling into eternal hell. The matter of your salvation is extremely serious and needs to be urgently resolved. Soon the rescuers were able to clamp a fresh cable below the break and haul the bell to safety. Everyone who is saved can say “In loving kindness Jesus came, My soul in mercy to reclaim, And from the depths of sin and shame, In love He lifted me.” “The Son of Man is come to seek and to save that which was lost” (Luke 19:10).

A Mistake
There was a mix-up over Seaman First Class Bill Boulton, at first he was reported missing, when his wife heard this she collapsed in grief. Five tear streaked hours later it was straightened out and she was told he was actually rescued – then she collapsed all over again! However, when “the roll is called up yonder” there will be no mistakes! All who are safe in Christ can never perish, “I give unto my sheep eternal life and they shall never perish” (John 10:28). But all others will be eternally lost.

Are you Saved or Lost?