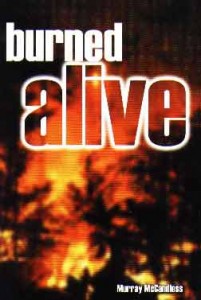 In the year 1909, J.P. Conaway was standing by the rail behind one of the open-hearth steel furnaces in a large plant at Steubenville, Ohio, watching the heat of molten steel fill the large ladle. The slag running over the edge soon filled the pit to the top and made it a boiling lake. At the signal from the boss-melter, the crane, groaning and creaking, lifted its mighty load of nearly one hundred tons and moved away toward the pouring platform where a crew of men were waiting to pour it into the moulds. At the furnace, the men prepared to close up the tap-hole to make ready for another charge. The spout, made of steel and lined with brick, had to be removed quickly, lest it should solder itself to the furnace.

The second-helper, a powerful young Scotchman of about 25 years, come running around the furnace in a hurry seeking to fasten a double chain to the spout and remove it by using the hydraulic crane. In his haste, however, the man lost his footing and plunged with a scream into the molten mass bubbling below. There was a mighty hiss as he went feet first into the pit. Horrified, I ran for the stairway and was one of the first to reach the poor man. I could see at a glance, a form burned almost beyond recognition. Next, we heard words from the lips of the dying man which sent a shudder through us all, “Boys, it’s death and hell for Jack now.”

I was instrumental in getting Jack Rowe this job. Some time before he had thanked me for taking an interest in him, and said, “I think I am on the right track now.”

He had heard the Gospel preached a few nights before, and Christian friends had warned him and pleaded with him from time to time; but, perhaps, like you, dear reader, he thought he had plenty of time, and he would take a chance, after all, he was young.

I called the ambulance which soon hurried him to the hospital. Kind hands did what they could to alleviate his terrible suffering; but “the pains of Hell” got hold of him and rose above the pains of fire, for with his charred stumps he would kick the bottom of the bed, and with a voice that could be heard outside the building, he shouted – “I’m going to hell! I’m going to hell!”

Men that were saved tried to tell him the story of the Cross and how he could be saved, but whether he was able to take it in or not remains a mystery. True repentance is never too late; but late repentance is seldom ever true.

The word of God says – “He, that being often reproved hardeneth his neck, shall suddenly be destroyed, and that without remedy.” Proverbs 29:1.

In contrast to the above story, I wish to depict another deathbed scene. In the year 1915, at the same steel works, and near the same spot, a tired man of 60 years or more had just finished his night’s work of getting the ladle stoppers into shape. The hours were long, the work was hard; so he stretched himself out for a few minutes’ rest before the shift changed. Nearby was one of the dangerous slagpits filled to the brim but cooler than the one mentioned before. Underneath was large water-main with a pressure of 600 pounds or more. For some reason the pipe sprang a leak and the water slowly seeped upward until it reached the hot point of the molten slag and when enough steam was generated the pit exploded like an earthquake. The great mill trembled – clouds of dust completely darkened the place. My father was working some distance away and was well acquainted with the passageways beneath the furnaces, so he moved towards the place of the explosion. The man who had lain down to rest was caught in the awful shower of slag and nearly burned alive. Another worker tore away the flaming clothes from his body. Workmen gathered quickly and threw their coats about him. There was a little delay as they waited for an ambulance. Suddenly the dying man broke the silence by starting to sing –

Christians standing near helped finish the hymn, as grown men wept openly. The song ceased and the voice of the dying man was heard again – “Men, it is over 30 years since the Lord saved me. I was a poor sinner without God and without Christ in Dromore, County Down, Northern Ireland; there I learned of my lost condition and of the love of God. Death has not found me unprepared. Men, are you ready? Let us pray.” He prayed as few men could pray and his dying words will long be remembered. This brother was one of God’s noblemen and a great soul-winner. After 24 hours of intense suffering, the soul of W.J. McCandless went into eternity.

“For God so loved the world, that He gave
His only begotten Son, that
WHOSOEVER
believeth in Him should not perish,
but have everlasting life.”
John 3:16

“And I saw a great white throne, and Him that sat on it, from whose face the earth and the heaven fled away; and there was found no place for them. And I saw the dead, small and great, stand before God; and the books were opened: and another book was opened, which is the book life:…
And WHOSOEVER
was not found in the book of life
was cast into the lake of fire.”
Revelation 20:11-15.

In which ‘whosoever’ are you?