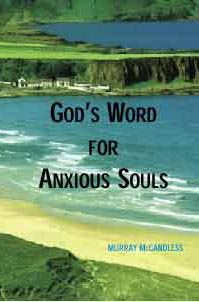 How often we have heard anxious souls declare in their frustration,
“I believe, but I am not saved!” They hear the same message of the gospel as others, read the same Bible verses, and yet they are described in the sad words of Jeremiah 8:20 “not saved”.
We must remember that salvation is not merely the result of human understanding. Salvation is the result of revealed truth from God’s Word to the anxious soul, accepted by faith.
I cannot over emphasize the value of the personal, careful reading of the scriptures: “What saith the scripture?” (Galatians 4:30).

It will be helpful to open your Bible and read the passage, John 4:46-54, concerning the nobleman’s son. This is one of the clearest passages in the gospels to prove conclusively that one must accept His Word and that alone. “He that rejecteth me, and receiveth not my words, hath one that judgeth him: the word that I have spoken, the same shall judge him in the last day” (John 12:48). “Wherefore neither thought I myself worthy to come unto thee: but say in a word, and my servant shall be healed” (Luke 7:7). “Being born again, not of corruptible seed, but of incorruptible, by the word of God, which liveth and abideth for ever” (1 Peter 1:23).

The nobleman had made his way to the Savior with burdened heart concerning his dying son. When he met the Savior, he was greeted with these words: “Except ye see signs and wonders ye will not believe.” At this puzzling statement, the man had one of two options: forget what he heard and go home and bury his son; or he could do as he did, accept the same and in faith and humility exclaim, “Sir, come down ere my child die” (vs 49). The Savior immediately said, “Go thy way, thy son liveth.” Please note the period after the word “liveth”; nothing more was needed to heal the boy. I would like to present two questions: (1) What if the man didn’t believe the word? Would his son have lived? (2) What if the man didn’t go his way? Would his son have lived?

Suppose we were to encounter this man joyfully making his way home. We stop him and ask him why he is so happy. Would he not with joy tell us his son is living? If we were to ask him how he knows that, would his reply not be “because Jesus said it”? Suppose later the same day we meet the same man, and now he is very disturbed; joy is gone, no peace. Is his boy better, is he living? Most certainly; his feelings have nothing to do with the fever being rebuked in the boy by the Son of God.

Now an interesting thing happens. He meets his servants. Normally they were not to leave the property of the master. Possibly as the mother cradled her once dying boy in her arms she saw him sitting up and noticed the fever was gone. So she would send the servants to get the master in the belief that the Savior isn’t needed. The boy is better. She doesn’t realize that the Savior had spoken the word and the boy would live for this reason. To prove how little this man’s faith was, he asks the servants when he began to get better (vs 52). Did he think it was something gradual? Salvation is not gradual; it is the miracle of a moment, because it is a birth (John 3:3). How come he doesn’t announce to the servants upon meeting them that he knows the boy is living? Maybe he wasn’t sure. Did that change anything? Not a thing. He now knows that it was the same hour in which Jesus said unto him, “Thy son liveth”, and himself believed and his whole house. Again let me remind you, it was not “thy son liveth if you believe”, or “thy son liveth if you go your way”. It is true, he believed, and it is true he went his way, but it had nothing to do with the boy living or dying. IT WAS ALL IN WHAT JESUS SAID.

The blind man in John 9:35 is asked, “Dost thou believe on the Son of God?” Notice, the man does not confess to more faith than he possesses, and replies, “Who is he, Lord, that I might believe on him?” Listen to the delightful and assuring reply of the Savior: “Thou hast both seen him, and it is he that talketh with thee” (John 9:37-38). And he said, “Lord, I believe,” and he worshipped Him. He had to take His Word for it that He was Jesus, the Son of God.

So the anxious sinner asks, “Is my believing needed then?” Yes, it is, and for this reason. The work of Christ on the cross is complete and it is enough to save all. But God gives the free gift of eternal life to those who accept it as repentant sinners. So they believe God’s Word. Sometimes we treat the word “believe” as if it were a poor choice of word for God to use, and it has stumbled so many people. What stumbles them is not so much the word as their unbelief and their futile efforts to make belief, rather than Christ, their savior.

There are, of course, other words used for the same experience, but in the end we place our trust in the Savior or we fail to do so. That is exactly what His Word tells us. We reject it at our peril. “He that believeth on him is not condemned; but he that believeth not is condemned already, because he hath not believed in the name of the only begotten Son of God” (John 3:18). “He that believeth on the Son hath everlasting life; and he that believeth not the Son shall not see life; but the wrath of God abideth on him” (John 3:36). “Verily, verily, I say unto you, He that heareth my word and believeth on him that sent me, hath everlasting life, and shall not come into condemnation; but is passed from death unto life”
(John 5:24).

If you have never been convinced that you are going to hell, it is not going to be possible for you to be sure that you are now on your way to heaven. The Word of God and of the Lord Jesus is our authority for both. If the words of Christ mean anything they mean everything. He assures us of our being lost without Him. He assures us of His power to save those who trust Him. The question is, do we trust His Word alone? “But what saith it? The word is nigh thee, even in thy mouth, and in thy heart: that is, the word of faith, which we preach; That if thou shalt confess with thy mouth the Lord Jesus, and shalt believe in thine heart that God hath raised him from the dead, thou shalt be saved” (Romans 10:8-9).