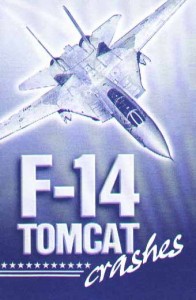 Horsham township, near Philadelphia, PA, was stunned about 4:45 p.m. Sunday afternoon June 18, 2000 when the war horse of the Navy’s carrier fleet, the Tomcat F-14 crashed in a residential area about a mile from our tent, where we were preaching the gospel. Two highly skilled pilots from Oceana Naval Air Station, Virginia Beach, VA, were killed in the crash. Each of the pilots had more than 1000 hours of training in that aircraft and were some of the elite among Navy pilots.

The $38 million, sophisticated F-14 jets were used effectively in Desert Storm and in the recent Bosnian crisis, and are capable of flying at twice the speed of sound.

The supersonic jets were part of the annual “Sounds of Freedom” Willow Grove Naval Air Station air show and were performing a simulated carrier landings. This particular maneuver as called a “waveoff”. The pilots had performed this same routine on Friday and Saturday. As the jet approached at slower speed it was waved off and sped away in a climbing turn to make another landing. As more than 120,000 spectators watched, it banked steeply, wavered and plunged upside down into a wooded area in a ball of flame and smoke.

This event reminds us vividly of the uncertainty of this life. The word of God makes it crystal clear that we have an allotted time upon this earth. God “giveth to all life, and breath, and all things; and “hath appointed the bounds of our habitation,” Acts 17:25,26. There is no one who knows when his or her last moment will come. It is James who says “For what is your life? It is even a vapor, that appeareth for a little time, and then vanisheth away” James 4:14.

Each of us inherits a sinful nature because of our fall in Adam, Gen. 3. Because of this indwelling sin nature, we practice sin in thought, word, and deed and are thus accountable to our creator.

Perhaps you are asking; “How can I be assured of being in Heaven and know that all will be well when life is over?”

It is with joy that we can tell you the word of God has the answer. The moment the sinner realizes that his greatest need of all is to know the Lord Jesus Christ as his own personal Savior and trusts Him, depending alone upon His finished work upon the cross, he can be assured of Heaven. This is a present possibility. We turn again to the sacred pages and learn that “God so loved the world that He gave His only begotten Son…” to die upon the cross at Calvary. There, after men had exhausted all the enmity of their hearts by crucifying Him; God punished His Son in the place of the sinner. This is the truth of John 3:16. The moment the sinner places simple faith in what God has done, he has the assurance from the scriptures that “whosoever believeth in Him should not perish, but have everlasting life”. John 3:16.

May the reader of these lines know today the joy that God’s salvation brings through faith in the work of the Lord Jesus Christ when He died as our substitute upon the cross of Calvary, thereby satisfying all the claims of God’s righteous throne that were against us because of sin. We can commend the Savior to you as one who not only saves, but He keeps and He satisfies the longings of the heart.

In view of the uncertainty of this life, the purpose of writing this is to urge the reader to make preparation for eternity that is just ahead for all of us. “Prepare to meet thy God” Amos 4:12.